This tutorial provides a practical, hands-on introduction to inferring developmental trajectories with Waddington-OT.

Single cell RNA-sequencing allows us to profile the diversity of cells along a developmental time-course by recording static snapshots at different time points $t_1, t_2, \ldots, t_T$. However, we cannot directly observe the progression of any individual cell over time because the measurement process is destructive.

Waddington-OT is designed to infer the temporal couplings of a developmental stochastic process $\mathbb{P}_t$ from samples collected independently at various time points. We represent a developing population of cells with a time-varying distribution $\mathbb{P}_t$ on gene expression space. The temporal couplings describe the flow of mass as the population develops and grows. For a pair of time points $(t_i,t_j)$, the coupling $\gamma_{t_i,t_j}$ tells us: What descendants does cell $x$ from time $t_i$ give rise to at time $t_j$?

In this tutorial, we explore the Waddington-OT workflow, starting with inferring temporal couplings with optimal transport. We then go through numerous downstream analyses including visualizing cell fates, interpolating the distribution of cells at held-out time points, and inferring gene regulatory networks. This page guides the reader through the concepts, each of which is illustrated with an interactive Jupyter notebook using data from a time-course of iPS reprogramming (Schiebinger et al. 2019).

The tutorial input data contains an expression matrix and a file indicating the time of collection for each cell. The zip folder also contains the output of most intermediate computations, so the reader is (mostly) free to skip ahead to later notebooks without running all earlier notebooks. For this reason we also provide precomputed transport matrices (in a separate zip folder to reduce file sizes). Note that the expression matrix has been proprocessed by log-normalizing the raw count data (i.e. the units are log-tpm).

In addition to these notebooks, we also provide a command-line interface.

Visualizing and Exploring the Data

In this section we explore the time-series of reprogramming from Schiebinger et al. 2019. The dataset consists of 39 time points collected over 18 days of reprogramming. In the following notebook we visualize the dataset in two dimensions, and we examine patterns of gene expression programs.

Notebook 1: Visualizing and exploring the data

In this notebook we visualize the data with the force layout embedding. This is a graph visualization tool which we apply to layout a nearest neighbor graph constructed from our single cell gene expression data. There is a node for each cell, and each cell is connected to its $k$ nearest neighbors. Then the cells are arranged in 2D so that cells connected by an edge attract, and cells not connected by an edge repel each other. This visualization is used many times throughout the tutorial.

To get a basic idea of the lay of the land, we examine patterns of gene expression programs. To do this, we score each cell according to expression of a dictionary of gene signatures; in other words we test whether the set of genes in a signature is significantly expressed in each cell. Based on these gene signatures, we define sets of cells. In the following notebooks, we will use optimal transport to examine the developmental trajectories leading to these cell sets.

It's also possible to use the command-line interface to compute a FLE visualization of the data and to compute gene signature scores. 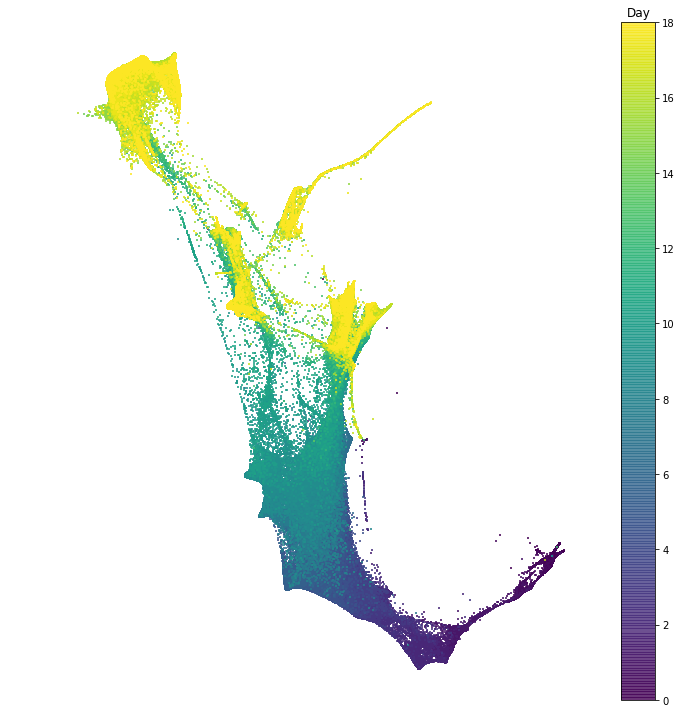 In this notebook we compute transport matrices connecting each pair of time points, and we examine the effect of each parameter on the solution.

To compute the transport matrix $\pi_{t_1,t_2}$ connecting cells $x_1, \ldots, x_n$ at time $t_1$ to cells $y_1, \ldots, y_m$ at time $t_2$, we solve an optimization problem over all matrices $\pi$ that obey certain row-sum and column-sum constraints. These constraints ensure that the total amount of mass flowing out of each cell $x_i$ and into each cell $y_j$ adds up the correct amount. We select the transport matrix with the lowest possible transport cost, subject to these constraints.

We solve the following unbalanced transport optimization problem introduced in Chizat et al 2018, where we only enforce the row-sum constraints approximately and we add entropy to the transport matrix:

Here we use the notation $$\hat {\mathbb{P}}_{t_k} = \frac 1 n \sum_{i=1}^n \delta_{x_i}$$ for the empirical distribution of samples $x_1,\ldots,x_n$ at time $t_k$, and $\text{KL}(P \vert Q)$ denotes the KL-divergence between distributions $P$ and $Q$. The function $c(x,y)$ encodes the cost of transporting a unit mass from $x$ to $y$. We define $c(x,y)$ to be the squared euclidean distance between cells in local PCA space. This PCA space is computed separately for each pair of time points. Finally, the function $g(x)$ encodes the growth rate of cell $x$, and is used to specify the budget of descendant mass for each cell $x_i$ at time $t_1$.

A larger value gives more entropic descendant distributions, where cells are able to obtain more fates. A smaller value of $\lambda_1$ enforces the constraints less strictly, which is useful when we do not have precise information about $g(x)$.

To define the growth rate function $g(x)$, we first form an initial estimate of cellular growth rates based on gene signatures of proliferation and apoptosis. We then refine this estimate using unbalanced optimal transport as follows. Because the row-sum constraints are not enforced strictly, the actual row-sums of the optimal transport map $\pi$ can be different than the initial input growth rate function $g$. We interpret these new row-sums as a meaningful estimate of growth rates, and use this to form a new estimate of the growth function $g^{(1)}$ which we can plug back into the OT optimization problem to compute a new transport map $\pi^{(1)}$. We can therefore iterate back and forth between learning growth rates $g^{(i)}$ and learning transport maps $\pi^{(i)}$ until the procedure eventually converges. In practice, we find that just a few iterations are usually sufficient.

It's also possible to use the command-line interface to compute transport maps.

We first describe how to compute the descendants of a set of cells. Given a set $C$ of cells at time $t_j$, we can compute the descendant distribution at time $t_{j+1}$ by pushing the cell set through the transport matrix. This push forward operation is implemented in a matrix multiplication as follows. We first form the probability vector $p_{t_j}$ to represent the cell set $C$ as follows: $$p_{t_j}(x) = \begin{cases} \frac 1 {|C|} & \quad x \in C \\ 0 & \quad \text{otherwise}\end{cases}.$$ Viewing this as a column vector, we push forward by multiplying by the transport map on the right $$p_{t_{j+1}}^T = p_{t_{j}}^T \pi_{t_j,t_{j+1}}.$$ We can then push $p_{t_{j+1}}$ forward again to compute the descendant distribution at the next time step. Continuing in this way, we can compute the descendant distribution at any later time point $t_{\ell} > t_j$. Note that this is equivalent to first forming the long-range coupling $\gamma_{t_j,t_\ell}$ and then pushing $p_{t_j}$ forward according to this coupling: $$p_{t_{\ell}}^T = p_{t_j}^T \gamma_{t_j,t_\ell}.$$ However, in practice it is faster to compute the descendant distribution with successive push-forward operations, each of which involves a matrix-vector multiplication. By contrast, forming the long-range coupling involves matrix-matrix multiplies, which are significantly more expensive.
To compute the ancestors of $C$ at an earlier time point $t_i < t_j$, we pull the cell set back through the transport map. This pull-back operation is also implemented as a matrix multiplication $$p_{t_{j-1}} = \pi_{t_{j-1},t_j} p_{t_j}.$$ The trajectory of a cell set $C$ refers to the sequence of ancestor distributions at earlier time points and descendant distributions at later time points.
In this notebook we explore tools to compute ancestor and descendant trajectories of cell sets, and also several tools to analyze these trajectories. In particular, we show how to examine the shared ancestry between a pair of cell sets, to study when these two cell sets diverged from a common set of ancestors, and we show how to summarize an ancestor trajectory in terms of an ancestor census. This census computes the amount of ancestor mass contained in each of a number of descriptive cell sets.

It's also possible to use the command-line interface to compute trajectories, trajectory divergences, and expression trends. 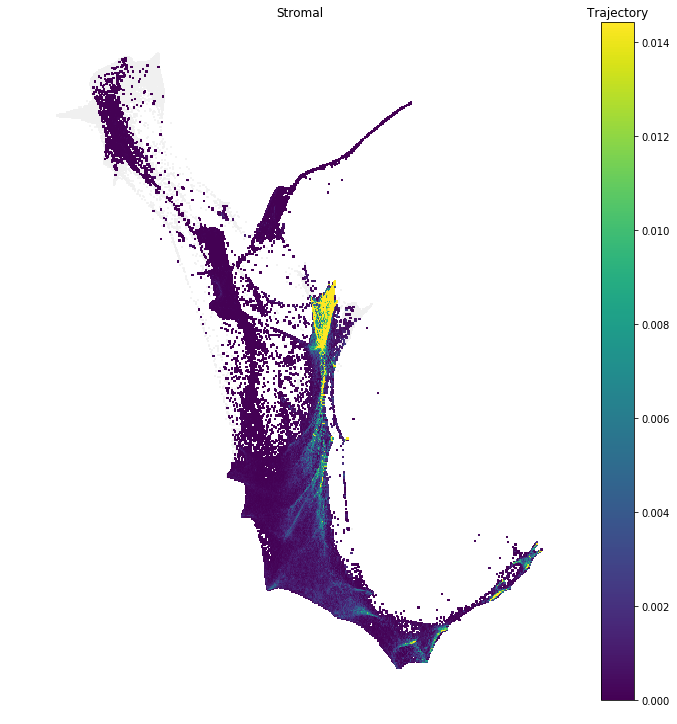 It's also possible to use the command-line interface to compute fate matrices. 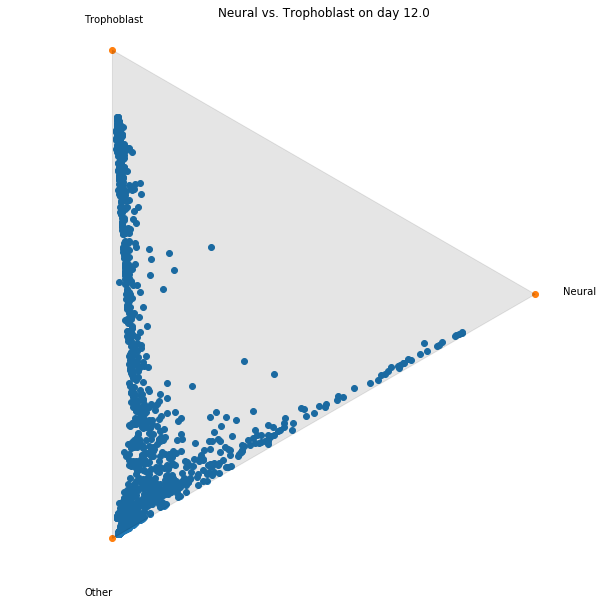 It's also possible to use the command-line interface to compute transition tables. 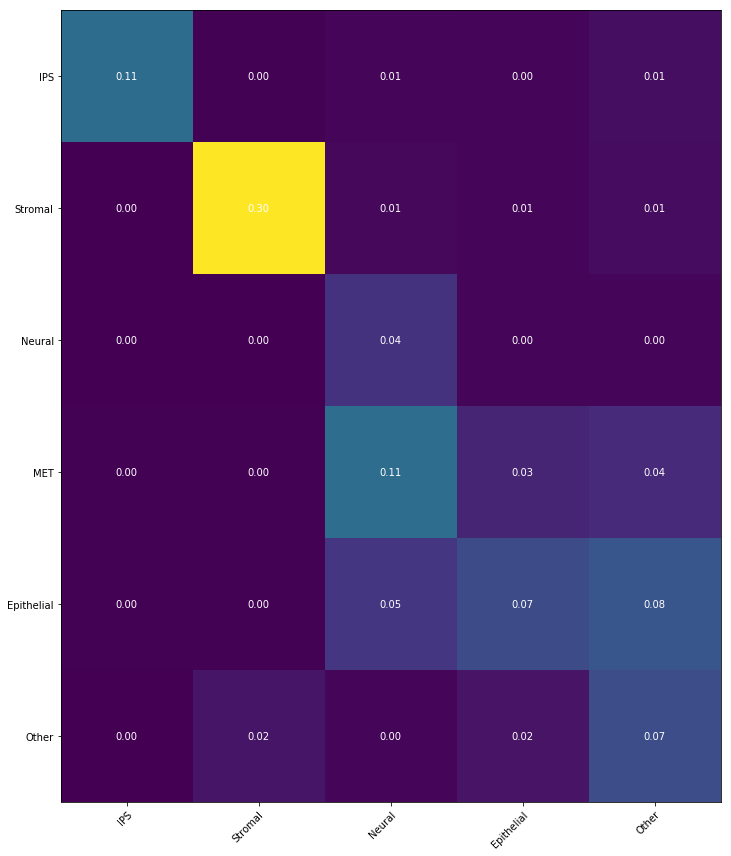 In this section we explain how to test whether temporal resolution is fine enough. This provides a rigorous basis for iterative experimental design: one can identify epochs without sufficient temporal resolution and collect additional samples in those intervals. Intuitively, the developmental process $\mathbb{P}_t$ traces out a curve in the space of distributions. We sample cells at various time points and obtain noisy samples along this curve. The empirical distributions $\hat{\mathbb{P}}_{t_i}$ don't lie precisely on the curve because we only have finitely many samples, and there are potential batch effects. Optimal transport allows us to connect these noisy samples with straight lines (aka geodesics or shortest paths) in the space of distributions. With fine enough time resolution, this piecewise-linear approximation provides a good fit. We can test the quality of fit by holding out time points and comparing our interpolation estimate to the real held-out data. The fit will be better when the time-resolution is shorter, but it won't ever be perfect because the measurements are inherently noisy. To quantify the baseline noise level, we compute the distance between two independent replicates at the same time point. When this noise level is comparable to our quality of interpolation, we have some reassurance that OT is working well.

In this notebook we apply the Waddington-OT Validation script to the reprogramming dataset. This script checks the quality of interpolation at each triplet of consecutive time points $(t_i,t_{i+1},t_{i+2})$:

We can also test the quality of interpolation over arbitrary intervals by explicitly providing triplets $(t_i,t_j,t_k)$ as input. When we test longer temporal intervals, we see that the quality of interpolation decreases as expected. Finally, we note that this validation procedure only provides a guarantee when the temporal resolution is twice as fine as necessary. When we compute transport maps to analyze the data, we don't skip any time points. It's possible that $\pi_{t_1,t_2}$ is a good approximation to $\gamma_{t_1,t_2}$ even when we aren't able to validate that $\pi_{t_1,t_3}$ is a good approximation to $\gamma_{t_1,t_3}$. So we can proceed with caution with the analyses described in the other notebooks, even if we aren't able to prove that we achieve the baseline noise level.

It's also possible to use the command-line interface to run the validation script.

In this section we show how to fit models of gene regulation to temporal couplings. Recall that the temporal coupling $\gamma_{t_1,t_2}$ defines a joint distribution between expression profiles at times $t_1$ and $t_2$. We can therefore sample pairs of points $(x_i,y_i)$ according to this joint distribution and use this as training data to fit a regulatory function $$y \approx f(x).$$ This idea can be implemented in different ways, depending on the class of functions we optimize over.

It's also possible to use the command-line interface to identify differentially expressed transcription factors.